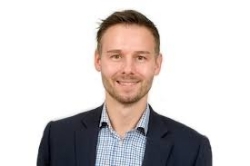 Dr David Thomson is a Consultant Clinical Oncologist at The Christie NHS Foundation Trust in Manchester.

Dr Thomson qualified from Oxford University Medical School in 2004, where he was awarded the Greenhill Exhibition in Medicine (Trinity College, Oxford) and achieved a First-Class honours degree (2001). He completed core medical training in Oxford and Manchester in 2009 and was then appointed Academic Clinical Fellow/Specialty Registrar in Clinical Oncology in the North West of England (2009-2015). He is now Consultant Clinical Oncologist and Honorary Senior Lecturer at The Christie in Manchester.

During a two year Doctor of Medicine (MD) research degree at the University of Manchester (2013-2015), he gained excellent clinical and research experience in technical head and neck radiotherapy and proton beam therapy. He was awarded the RCR Cyclotron Trust Fellowship for clinical experience in proton beam therapy at Massachusetts General Hospital (April 2013); and The Bernstein Family Bursary to support a clinical research Fellowship at the University of Pennsylvania (April-June 2014). He has delivered a number of national presentations and is widely published in head and neck cancer.

Dr Thomson is actively involved in medical education and a Clinical and Educational Supervisor. He achieved a Postgraduate Certificate in Medical Education with Distinction (Edge Hill University, 2015).