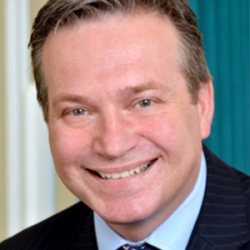 Dr McLaren undertook Undergraduate training at St Mary's Hospital Medical School in London and also undertook an intercalated BSc in Clinical Science where he gained First Class Honours. His General Medical training was at Queens University Hospital Nottingham and he had specialist cancer training at Velindre Cancer Hospital Cardiff. He was given a clinical Fellowship specialising in GU oncology at the British Columbia Cancer Agency, Vancouver and was appointed as Consultant Clinical Oncologist and Honorary Clinical Senior Lecturer at the Edinburgh Cancer Centre in 1998.

Dr McLaren is a specialist in Genito-Urinary Oncology and runs a large practice offering non-surgical treatment with radiotherapy and chemotherapy for Urological Cancer patients. He has a particular interest in Prostate Brachytherapy (seeds). Edinburgh was the first Scottish Centre to offer this treatment in 2001. He can offer dose-escalated radiotherapy with IMRT for prostate cancer and conformal radiotherapy for bladder cancer. Neoadjuvant chemotherapy is routinely used before surgery or radiotherapy for bladder cancer. He provides the Scottish Prostate Brachytherapy Service in conjunction with Glasgow. The Edinburgh brachytherapy team was honoured to win Hospital Doctor Oncology Team of the year in 2005