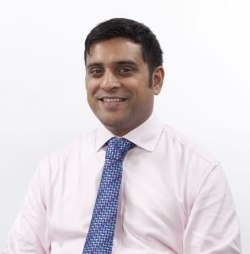 Dr Rovel Colaco is a Consultant Clinical Oncologist based at The Christie NHS trust in Manchester.

Dr Colaco trained in clinical oncology at the Christie before undertaking specialist fellowships in the USA and the University of Florida Proton Therapy Institute and Yale University. He was the first UK doctor to train in proton therapy spending 12 months at the Florida Proton Therapy Institute where in addition to treating patients he also published several peer reviewed manuscripts on proton therapy research in international journals. Following this he was the first doctor selected to undertake a year long period of training in stereotactic radiosurgery and stereotactic radiotherapy at Yale University working with both the Gamma Knife and Cyberknife and gaining expertise in stereotactic treatment of brain, bone and spine metastases. He was appointed as a consultant at the Christie on his return to the UK and has been involved in development of The Christie Proton Therapy centre with a leading role in development of treatment protocols for proton therapy. He is the principal investigator at the Christie for the CORE trial examining the role of stereotactic radiotherapy in metastatic lung, breast and prostate cancer and also leads development of spine and bone stereotactic radiotherapy at the Christie.

Published in Oncologists
CONTACT
More in this category: « Dr David Woolf
back to top