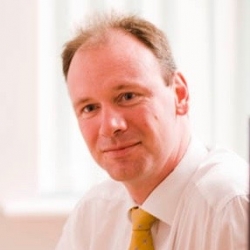 Mr Finlay Curran is a Consultant General and Colorectal Surgeon based at Manchester Royal Infirmary.

Mr Curran provides high quality care. He qualified from the University of Glasgow in 1989 and then trained in Merseyside, Glasgow and Manchester. He also sent time in Tubingen, Germany on a Royal College Travelling Fellowship. He was appointed as a Consultant Surgeon in 2001, initially working in Stockport, then moving to Manchester Royal Infirmary in 2010.

Mr Curran specialises in endoscopy and hernia, colorectal and pelvic floor surgery. He performs both laparoscopic and open surgery.

Mr Curran has been involved in research throughout his career. He was the UK lead for an international multi-centred trial and has participated in other national trials within surgery. He has published in scientific journals and presented award winning research nationally and internationally. He is a member of the Association of Coloproctology of Great Britain & Ireland, an examiner for the University of Manchester and a Royal College of Surgeons Tutor.