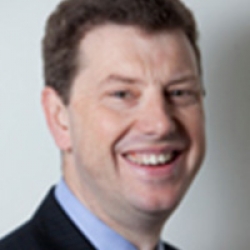 Professor Tim Illidge is a Consultant Clinical Oncologist based at The Christie NHS Foundation Trust.

Prof Illidge completed an undergraduate degree at London University and received his medical degree from Guy's Hospital Medical School, London, and subsequently his PhD from the Univ. of Southampton. After completing his training in medicine and oncology he was awarded a US Senior Fullbright Fellowship &  UK Winston Churchill Fellowship, which enabled him to work as part of the lymphoma team at Stanford University, California.

In 1998, Tim completed a CR-UK senior clinical research fellowship and was senior lecturer and honorary consultant in oncology at Southampton Univ. Hospitals (1999-2004). He was appointed as Professor of Targeted Therapy and Oncology at Univ. of Manchester in 2004 and leads a large experimental & clinical research programme.

Currently the chair of the National Cancer Research Institute (NCRI) clinical and translational radiotherapy research working group (CTRad), he leads a translational research group that is devoted to developing new anti-cancer treatments and has been an invited lecturer on aspects of lymphoma management at international meetings all over the world and has 100+ publications in this field.
In 2011 Prof Illidge received Researcher of the year from the School of Cancer and Imaging Sciences, University of Manchester and in 2012 received Researcher of the Year for Faculty of Human and Life Sciences University of Manchester.